This is the first part of our trip, before Scotland.

Derby is the capital of Derbyshire, on the bank of the River Derwent, settled as a town by the Romans as Derventio. It became one of the emblematic places of the Industrial Revolution for the rapid rise of the textile industry, which left iconic buildings in the city.

York is the capital of Yorkshire, and the inspiration for one of the most important and famous city on Earth: New-York. It is where Constantine the Great became emperor, later converting to Christianity and thus becoming the first Christian emperor. 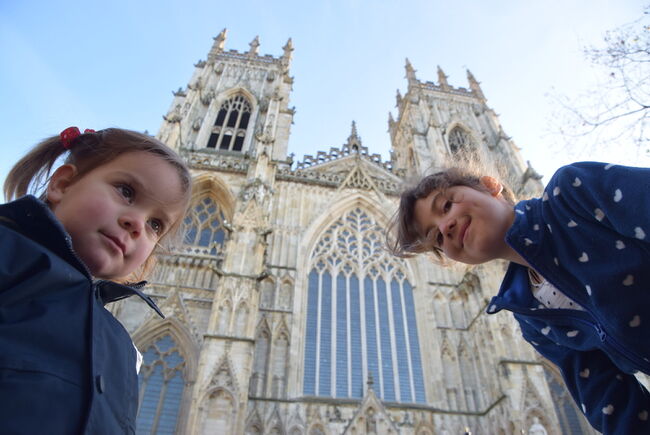 The city is one of the most beautiful in the UK. It retains its city walls, which feature four main gatehouses, or 'bars': Bootham, Monk, Walmgate and Micklegate Bar. They restricted traffic in medieval times and levied tolls.

The most important place is the Cathedral, known as the York Minster, which is full of details. As an example, there is a monkeys funeral in the lower border of the Pilgrimage Window stained glass [1], mimicking human endeavors, or the Doom stone, a 12th century carved stone in the crypt depicting damned souls engulfed in a hellish cauldron.

We passed by the Yorkshire Dales and this was our first encounter with this outstanding AONB, which became an immediate destination for further explorations. The spot chosen by Elena for our current visit was Gordale Scar. There is a burger van in front of the Gordale bridge that fits in a tiny loop that seems almost designed for this purpose. The facility is even mentioned on maps! We enjoyed a selection of its British delicacies before embarking on our little hike for this day, the famous Gordale Scar, followed by other neighboring highlights.

The Isle of Man

We spent Christmas in a lovely cottage on the Isle of Man, which had always been a much wanted destination. As it is likely that we will not return, for lack of opportunities as opposed to lack of interst, all our recordings are to be found on the dedicated page for this peculiar land, not part of the UK.

Lancaster is the capital of Lancashire, on the border of the beautifully named "river Lune". We visited as we passed by after spending our first night back in England and, for that matter, in the UK, near the hamlet known as Aldcliffe. In Lancaster, we spent most of our time in its cathedral, the castle being closed (we were not sure if it could be visited at all, having all the features of a serving jail) and the outdoors being windy and rainy. Surprisingly, this imortance and famous place was empty (but open). We still had time to go in the noria, at the insistence of Julia, who however complained right away of the weather not being suitable for a ride.