Eternal Sunshine of the spotless mind

I'm just... happy. I've never felt that before. I'm just exactly where I want to be.

Eternal Sunshine of the spotless mind is a movie masterpiece (#BestMovieOfEveryYearOfMyLife for 2004), in English and with a first-rate American & English cast, but with a strong French input (from Gaundry & Bismuth) in its elaboration, beyond the magic touch of Charlie Kaufman, that makes it quite unique in tone, style and meaning. In France, nevertheless, the movie's title remains untranslated (in Quebec it is known as Du soleil plein la tête).

The story is particularly innovative for the way it articulates a classical romance theme through an otherwise dystopian, sci-fi background. The mixing of these two genres is so successful that the love story gets the upper hand, relaying the sci-fi to merely supporting the narrative, in opposition to other such attempts where the love story is cheesy and could be dispensed with altogether. And what a support this is! 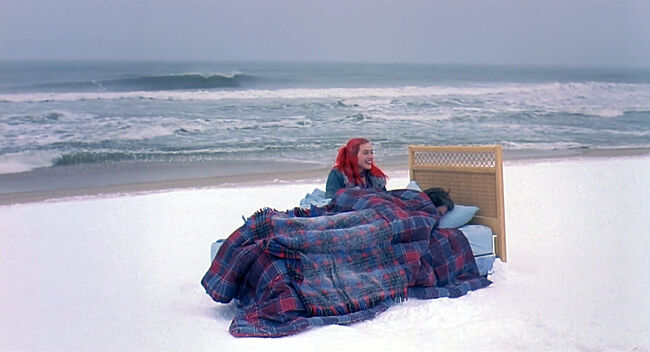 The science fiction component here serves its ultimate purpose of magnifying the intended message, that could have been formulated without, but at the expense of much more circumvolved, possibly boring developments. The message itself is about how love is ephemeral and doomed to fade and fail, but how, despite its ineluctable eventual collapse, it is also irresistible when it strikes. The title refers to a passage of Alexander Pope's poem Eloisa to Abelard that recounts the Héloïse and Abélard tragedy of frustrated but inexorable love. In the movie, the citation comes from the doctor's clumsy assistant, who also is unable to overcome her attraction for him. She quotes "Pope Alexander":

How happy is the blameless vestal's lot!
The world forgetting, by the world forgot.
Eternal sunshine of the spotless mind!
Each pray'r accepted, and each wish resign'd;

In the medieval version, Abélard was castrated and the two lovers retired to monastic life. In the movie, the retribution is no less physical: the lovers recourse to surgery to have the other erased from their memory and retire to their emptied past. This is done first by the female, impulsive, and followed as a vengeance by the male who we follow in his dreams as he is made to forget, one after the other, and in reverse chronological order, the sequence of memories of his vexed relationship.

In this recollection, the protagonist comes to realize that he does not wish to forget his lover after all and fights, in his dreams, the procedure, which takes place as the medical body performs the operation in the typical way of this profession: as a job and chore for which they have no interest other than technical, no empathy and with little resistance to any possible distractions, from alcohol to dancing on the very bed where the patient is being made forgetful, up to fornicating.

The idea is powerful as the loss of even the memory comes with a stronger impact than even a physical loss. Nothing is left whatsoever. As the procedure ends, with the memory of their first encounter being the last to be gone, the understanding that this beginning has in fact turned into an irreversible ending, is horrifying.

As the two heroes fall again for each other little after their sentimental great reset, the notion that love is a matter of fate is profoundly expressed, without ever approaching the grotesque or pityful. That the same happens to the surgeon and his assistant, this time motivated by lust rather than a communion of spirits, enlarges the attraction to whatever possesses people to capture each other, for whatever purpose. The great ending whereby the operation is discovered and both learn of their former hate for each others, but decide to go through it anyway, despite the realization that the ending will lead to the same destructive, irked and defeated outcome, achieves the Abélardian touch of transcending one's limitations and curse. Truely, a masterpiece, on all the aspects that it touches upon.

The acting from Jim Carrey is outstanding, in his role of a shy, introverted and frustrated but ultimately genuine and moving individual, that he is a great actor even without the faces and exuberance. Kate Winslet is much less impressive and fails to be, like Betty Blue, a little pest as attractive to the spectator than she is to the hero. The soundtrack, by Jon Brion, is a masterpiece on a par with the movie itself.