A blunder is an embarrassingly bad mistake, either for what it is, or for how it came to take place. It is something short of a catastrophe, though possibly slightly worst since a catastrophe may bear the weight of fate or inevitability, why the blunder was so easy to avoid with a minimum attention to details.

When Carlos Sánchez raised his interest for serious chess while in Woolsthorpean isolation in Munich, he discovered the term in shock, since he had then an infatuation for the bundles. Seeing a connection between the two could almost be a blunder in itself.

Kramnik overlooks a mate in one

In a now famous game (?!), Deep Fritz vs Kramnik, the human contender (Blacks) was faced with the following position:

You can see him contemplating the wrong end of the board: 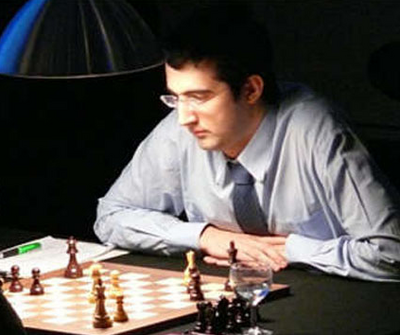 Kramnik played Qe3?? and the rest is a trivial chess problem even for a newbie freshly empowered with the rules. The beauty of this blunder goes far beyond the magnitude of the oversight, inconceivable even at much lower levels of the game. It goes much beyond being made by a first rate player. It would have been a delightful story to have an aging Kasparov, a nervously broken down Fisher, an alcoholic, homeless and stricken with Alzheimer Capablanca making such a mistake. This would illustrate the sinking of the human intellect when drifting from the apex of its abilities. But here, incredibly, this blunder of cosmic proportion was made by no-less than the then reigning chess champion, what's more, in the short window of time where he was ruling over both types of competitions, FIDE and classical (?!) To give a hint of the violence of this mistake, compare with the much debated Fisher's blunder against Spassky in the first 1972 game. The Kramnik move has been termed the blunder of the century by Judith Polgar. According to one account of the events by chessbase.com:

Kramnik played the move 34...Qe3 calmly, stood up, picked up his cup and was about to leave the stage to go to his rest room. At least one audio commentator also noticed nothing, while Fritz operator Mathias Feist kept glancing from the board to the screen and back, hardly able to believe that he had input the correct move. Fritz was displaying mate in one, and when Mathias executed it on the board Kramnik briefly grasped his forehead, took a seat to sign the score sheet and left for the press conference, which he dutifully attended.

In this other article, How could Kramnik overlook the mate? they are theorizing how such an event could take place at all. One interest of blunders is the comments they elicit. The game was being kibitzed upon in real time on chessgames.com. The blunder occured at page 12 of the game and is worth a look. Comments of interests include:

Swapmeet: This is disgusting.

WolfgangSenff: Kramnik must have found this program's fatal flaw: It can't find checkmates.

boz: I assume Fritz is in a million pieces on the floor right now.

karnak64: Gee -- maybe Chessgames can make this a Monday puzzle of the day ...

Eyal: I'm afraid it's too simple even for that.

technical draw: Wait a minute black can play 35..Qe1 and mate too!

Domdaniel: There are many famous blunders by top-level GMs. I can't recall a world champ with 30 mins to spare missing a mate in one, though.

Landman: When I talked about Fritz finding a miracle save, this isn't what I had in mind. =P

Grosbill: It's probably not a mistake. A world champion never miss a mate in one move. So it was deliberate. Don't ask me why...

technical draw: The conspiracy theorists are going to have a field day with this one.

FrenchFrog: Poor chess. First the loo tragedy, and now a world champion playing like an ape..

RookFile: I don't know how anybody can say with a straight face that these guys are stronger than Fischer.

Stellar King: This is humiliating to all chess players...

Phony Benoni: Often players achieve immortality as the result of a single move. For Fischer, it was 17...Be6 in D Byrne vs Fischer, 1956; for Botvinnik, 30.Ba3 in Botvinnik vs Capablanca, 1938; for Marshall, 23...Qg3 in S Levitsky vs Marshall, 1912. No matter what great things Kramnik accomplishes throughout his life, the first thing people will remember about him is how he fell into a mate-in-one with 34...Qe3.

adalav: It was, I may say, a bad day for the Human kind.

Duque Roquero: He was representing the human race vs. the machine and look what he did, the stupidest blunder ever.

Total Blunder: That's one small move for a man, one giant blunder for mankind

falso contacto: he thought he was white.

Lil Swine: might as well act stupid and deny this game ever took place

Llawdogg: I guess I don't have to worry about all my mistakes for the next 89 years.

RookFile: He must have been preoccupied with the queen trade and pushing the a pawn, and calculating how white would push the e pawn. The ending may be good for him. Instead, he got a different kind of ending.

Loosing Spain in frustration of not conquering France

Muslims had conquered pretty much all of the Iberian peninsula and had been established there for centuries, founding such important cities as Madrid. In one of their failure to extend their empire past the Pyrenees, they decided on their way back to Spain to get a quick win with the Asturians, trapped in a little corner without much interference with the rest of the Muslim stronghold over Spain. Getting this little bit would, at least, compensate for the frustration of being defeated by the Franks. In a typical catastrophic descent to hell where you can't stop something that is obviously going bad—something common in Chess—the Muslims triggered what would become the reconquista, that would see the whole of Spain go back to Catholic rulers. This is a big blunder for the Muslims as a wise recognition of one's defeat might have left Spain within their hands up to our days, and who knows how the world would have been shaped had it been the case!

Sinking of the Costa Concordia

The Costa Concordia disaster under the command of Captain Francesco Schettino.

This one is a tragedy as it caused human losses. And this is part of the blunder: killing passengers in a sinking boat accident meters from the coast! The whole operation is a cascade of blunders. The captain badly damaged the boat in a boasting display of how magnificent was the ship, making the first mistake at poor manoeuvring in a way so obvious that even some passengers thought it was unwise and too close to the rocks. The next mistake was to dodge the issue and ignore the problem, carrying on in a typical blundering mood that not doing anything about the problem will just have it pass, eventually. The next mistake was to flee the scene instead of participating, indeed, directing, the rescue operation, being insulted by the port authority, making pathetic comments such as complaining how dark it is down there and cooking up the most unlikely scenario to explain such a terrible abandon of one's responsibilities (falling into the lifeboat). Apparently, this still did not prevent the captain to later lecture on panic management at the University [1]. 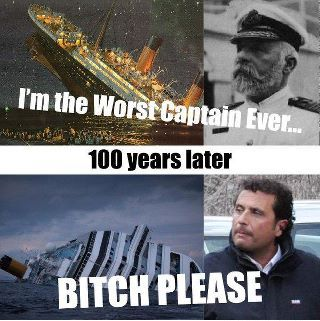 Making a home interview with the BBC

Robert Kelly, a Professor at the Pusan National University in South Korea, comments live on the BBC on the ongoing political turmoil in the country. Everything has been well prepared, the decorating books on the table behind, the perfect hairdressing... when all of a sudden, his private life starts flooding in.

There is so much to see here. He probably noticed the intrusion of his daughter on his own feedback from the moment the door opened, but when she enters into a big display of dancing as she approaches, he can't but have a direct look at her on his screen with a hardly repressed expression of despair and fury. Upon the commentator pointing out the break-in explicitly, his feeble attempts to contain the situation are completely shattered, first by the relaxed attitude of the girl who does not care a bit, and, wonderfully, by the baby also popping up, almost in a mock-up of the dance of the sister, and starting to make baby noises, at which point, when you think it could not get any worst, the woman rushes in blunderingly, in an exaggerated and awkward mission of subtraction of the cute disruptive elements, who resist the evacuation and make their disapproval loud and clear till in the corridor (she's the mother as the little girl asks "why mummy?" in Korean). As all good blunders, you have here the element of escalation and things getting out of control in matter of seconds. Also the characteristic ignoring the blunder in progress, only making it worse. But as this is endearing and funny, despite the obvious pain of the adults and the incomprehension of the children, no harm is being done. Of course, youTube's comments also add to the savour of it:

82pot: the only reason he didn't get up is because he doesn't have trousers on﻿.