My August reading list: in relation to the Plaza Mayor

In the two weeks of holidays we have in August this year, I will be reading:

All these books are related in some (sometimes very indirect) way to the Plaza Mayor de Madrid.

Now that we own Mayorcita (since 28 July (2015)), and since we will be there very little in the hot month of August, I feel I should work seriously in becoming a "Plaza Mayor de pro", knowing everything there is to know on the place. Hence a "reading list" dedicated to this "topic of expertise".

There is, however, little fiction directly related to the Plaza Mayor, and that which exists does not impose itself, if not as an instant classic, at least literature-enough looking (see, e.g., Arbat Square/Plaza Mayor Stories, not part of this selection, maybe later. There is also an El vecino del quinto. Serie Plaza Mayor, 1., which is precisely on the flat of Camilo, but a textbook for Spanish beginners with no intent at stating anything beyond grammar and vocabulary). All books I could find that are more or less of a literature type are in the list above, "Terminal Plaza Mayor" and "Sombras de la Plaza Mayor". The latter is for young readers but apparently penned by a gifted writer, the former comes with little information beyond the one you can extract from Google books but also appears to deserve its place in a library. I'll comment on these books once I'll have read them (probably sometime in September (2015).

Other titles have indirect (and in fact, personal) connections only, most certainly not mentioning the Plaza Mayor itself at all. The books by Fernando Sadot are also for young readers. Their connection to the square is that they have been written by the person from whom we bought the flat. We learned at this occasion he was a prized author. The first book (El hormiguero) we bought ourselves. The other one, the prized one, written a year before I was born, he offered to us, with this dedication (to Julia, her first): 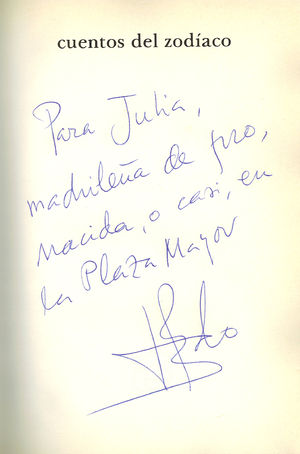 The last book, Rooftoppers, is even more remotely related. Our familiar view of the roofs of Madrid, precisely, one featuring the moon of Madrid (in a blue moon season) evoked this novel to our good virtual friend Kevin Clift. And every connection he makes which we have deepened down turned out to be an insightful, refreshing and worthy one. I am thus happy to pack this as well and see if one capital will remind me of the other. After all, one can connect everything to everything else.