This page is among our 'good articles'. It should/could be further expanded but we hope that it will still be useful in its present stage.

In Guaraní, "Itaipú" means "the singing stone" and refers to the unique sound of a loose rock that once vibrated in the rapids at this location. [1]

The singing stone is now gone and in its place stands the largest hydroelectric dam in the world [2]. We love dams, so we went to see the Itaipu one, one which is nearby the Iguazu falls, that brought us to this region of the globe. 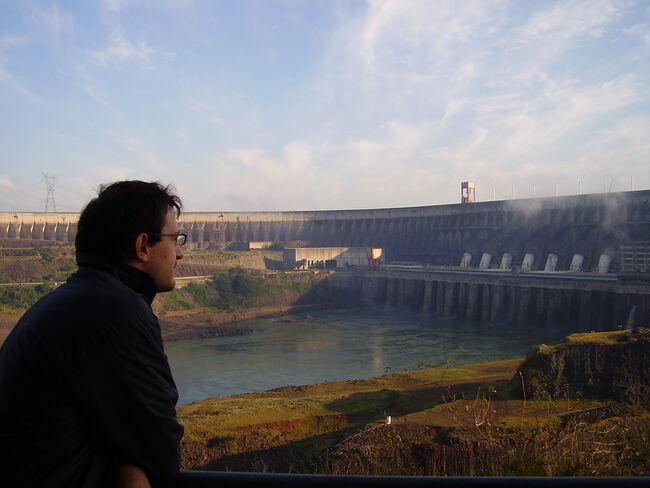 It certainly is impressive but visits don't let you see much of it, so unless you can make sure you will gain access inside, or let to walk around at your discretion (going there by yourself for instance rather than on a bus tour), I would not strongly recommend scheduling it if under time pressure. Instead, give all your attention to the falls (maybe also to the bird zoo, which we have not visited).

The extract below is from the Lake, a portion where powerful Guaraní choirs sing to the glory of Itaipu as if in a primitive religious celebration. You can hear repeatedly the voices imploring a god-like figure by singing its name with an adorable title—"papa I-Ta-Pu"—alternating slow oration and frantic incantations, accompanied by a high-pitched flute that is like a torrent flowing through the voices:

The lyrics tell of a Guaraní creation myth, according to which the Paraná River is "the place where music was born" [4]. It is then maybe no mystery that these waters also inspired another majestic composition, a likewise mixing of the classical score with choirs that detonate with the strength of Orff's O Fortuna, also in Guaraní: On Earth as it is in Heaven by Ennio Morricone, for The Mission soundtrack (1983).

Here are the lyrics for the extract above, translated from Guaraní by Daniela Thomas: