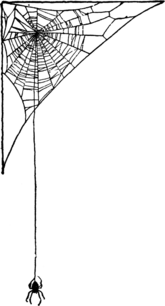 The spider's web has a place separating the hub from the catching area which is scarce in threads and intricate spiralling, the so-called web's free zone, which is the less visible part of the structure, which however remains of interest. I use it as a synonym for the less-known, rarely visited places of the internet where one nevertheless still find some of its best content!