The world after covid

What will be the post-covid world? Or, should I write, the covid-compatible world , since we may have something like this to maintain this "new world" order (I put quotes not to confuse with one of the unquoted versions, although they might be related): the covid itself, its second wave, a menace of covid22, or whatnot. A collapse of some sort is impending. It is long due given the very capitalistic nature of our society, with unsustainable exponential growth, always producing more, always consuming more, always more and more and more. The economy with its inflating tensions between the increasingly poors and the obscenely rich, has to collapse, or the resources copiously wasted, have to collapse (but this would come later). Unexpectedly to most, so it seems, another collapse may have got in the way before that. A sanitary collapse. Instead of everybody going to a standstill because banks have gone bankrupt, or because oil tanks have gone dry, we have instead a twelve-Monkeys scenario which brings us to something in essence equivalent: the collapse of society. Possibly in its wake, the collapse of civilization. To me there is no surprise that our way of life has changed so briskly in so little time. I've been expecting this since 2013 or so. But I was thinking this would come either from the banks, or from the streets. I toyed with the idea of a world-war, an international conflict, to change the rules. I regarded sci-fi scenarios like AI taking over as too far remote although they are catching up quickly. Indeed, I didn't think of a sanitary crisis. And here we are.

The sanitary crisis is .

Everybody gets offended by everybody else. There is no 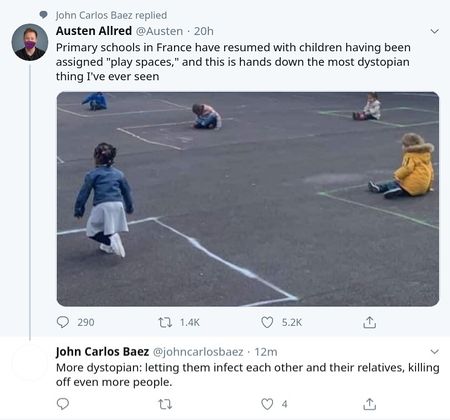 Tintin the conspiracy theorist, in "Prisoners of the sun", understanding the quarantine is a trick to cut short all type of investigation. Translation below by Leslie Lonsdale-Cooper and Michael Turner.