The victory of Adolphe Thiers

Look at this man. 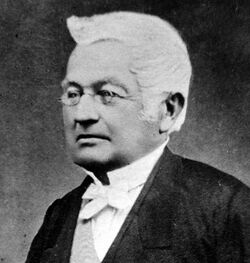 He was a genius of political evil. He is the one who conceived an idea so profound that we are still in its clutches nowadays: an appearance of virtue, a certificate of good conduct, is all that you need to be left with all the possible vices and commit all atrocities with full impunity. Thiers initially wanted a King, but if he doesn't reign. Later, he made a breakthrough, even better than a king, a republic, if it doesn't govern. In all cases, their role is to justify, by the decorum of their presence, by the illusion of their symbols, all the criminal actions that a dictator could not commit, for the slightest abuse would be universally condemned as the whims of a tyrant. But if it's a democracy, that oppresses, tortures, mutilates, then it's okay, this is not only acceptable, this is even something that you can defend, or if you don't want to bother, at least ignore, live with and carry on with your own business with total peace of mind: it's right, because it's democratic. A majority acquiesces, or did so at some point, so why should a minority oppose it? There will always be less people in the streets than at home looking at them be beaten up by the police.

You've seen the man. Now look at these images. I show you five photos related to what is currently going on in Australia. Indeed, they have all been taken from my twitter feed where I see them, or variations, mixed with the rest of the world going on with its business as if nothing dramatic is going on there.

The second exhibit is a collage of another five pictures, that one can find intertwined with those alike to what I selected above: 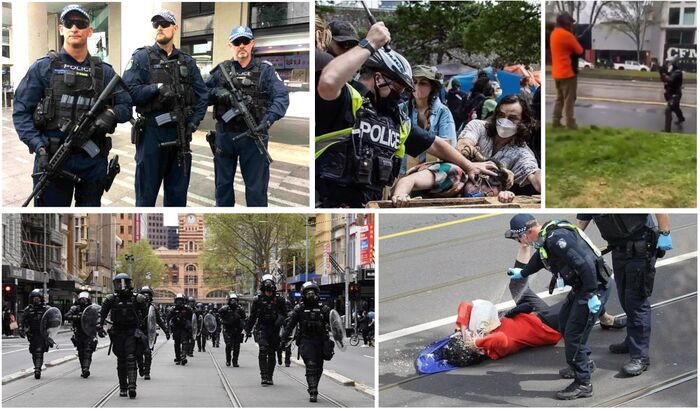 In which direction does your heart balance? Is that with the people, with all their humanity, smiling, booing, raging, uniting together and taking up the streets, raising their arms to the sky in defiance and dignity? Or is it with the overly armed military soldiers, who, when they are not covered from feet to nose with their black attire, display the same vicious expression as a pack of Dobermans, ready to jump at your throat without notice, in their display of force and brutality? These images are both revulsing and beautiful, they bring together the best and worst of our species: the desire for rebellion, for fraternity, for hope and progress, the intuition that the World can change and if doesn't, at least that we will die trying. Opposed to that: the monopoly of violence, the machines, the dumb police maddened by its own ferocity. The top-right picture from the 2nd exhibit brings these two aspects in direct confrontation: if you look at the video, you see a barking, furious and deadly-threatening over-protected militiaman approaching a man whom he points at close-range with his gun, shouting "Move! Move! Move!" like a lunatic completely out of his mind and on a rampage against the defenceless. Facing him, a proud, superb, resplending man who doesn't bulge, or only so slightly to balance his composure. He looks at this dangerous maniac, with the determination of the just and the rightful. His attitude is so Christic, I even read commiseration in this valorous stance, ready to take the bullet without unfolding his arms. But there is nothing supernatural here. There is a human being who decides to remain one, who gives up the privilege of comfort, of safety, to quench his thirst of dignity, ready to become a martyr and who can thus face the soldier with the same assurance and stability as a concrete wall, against which the monopoly of violence has the same effect, on this occasion, as a rattle of impotence. The functionary, the citizen, the policeman, the one who surrendered his humanity to a higher authority, to retain only his animality, is left with only that. He's defeated: the soldier realizes he won't be able to do anything but explode in his folly, and crush the skull of this man with his rifle, or shoot him in the belly, but that his intimidation will bring him no closer except than to the man himself, now an immovable mountain. Either because he is a coward or is awaken from his frenzy by this display of courage and heroism, he gives up, and backs up, pathetically. The Doberman became a poodle with its tail between the legs. This is beautiful to see: humanity wins. Violence dissolves as if cleansed by grace itself.

But such images, such encounters of the pure with the depraved, are not new, they actually populate our references of the eternal fight between good and evil. I am writing about them and reference Thiers because, in case you had not noticed, the people are supposedly the evil ones in the story that is currently unravelling in Australia, while the police are enforcing democracy, law and rightfulness. Or, with synonyms from Thiers himself, the police brings justice, order, humanity and civilization. The people facing them are, the story goes, unconscious morons who oppose the course of progress, who defy obvious and necessary measures of public health and hygiene. They are crass, they are stupid, they are enemies of science and reason, enemies of humanity itself. That is the narrative. That is the miracle of Thiers: to empower with an appearance of legality any outright crime, to justify virtually every abuse of power. We have seen shooting fleeing civilians who were peacefully protesting, throwing to the ground a peaceful person, variations of the same, with nose-breaking... I keep seeing over and over criminal use of force by the Australian police, and now, even the military, against its people. While this would be, to anybody who has not been spoonfed a soothing context, unacceptable, it becomes, with the insight of Thiers, something that you can argue, publicly defend, applaud, call for more. You can, with full peace of mind, support the vicious executioners and condemn the victims. You can defend the robocop who threatens a civilian, you can condemn naked people clashing against an army adorned with all the possible gadgets of protection and repression. People actually do that. This is the victory of Thiers. In our age of Media and Live information, his idea applies even fuller to images which, in their brute form, would offend anybody. With a stamp of respectability, they become the opposite picture of what they paint. A democracy needs not suppress the violence it exerts: it can display it, it can have journalists report it in real-time, since it has the label of the law, of the ballot, of a majority that surfaced at some point and in some form. This coverage even justifies the deed: "a dictator wouldn't show you this, therefore, if we let you enjoy the show, it's clear that it cannot be criminal or even reprehensible. You're welcome to even like it."

I'll conclude with this crystal clear summary of the evil trick, that can turn what is right and wrong upside-down: (en)